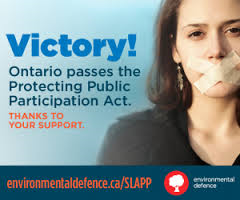 SLAPP legislation is intended to protect freedom of speech on matters of public interest.

Ontario legislation was passed in October 2015.

Strategic Lawsuits against Public Participation, or SLAPP, legislation are intended to allow the public to participate more freely in public discussions without fear of retribution or being sued.

The threat of a costly lawsuit can be used to intimidate or punish opponents and discourage others from speaking out. This legislation is intended to eliminate the threat against those who speak out in a public forum.

About a month after being passed, this new legislation was used by condo owners who prepared and distributed flyers denouncing their board.

It is up to the courts to decide if condo corporation matters constitute a public forum and fall under the jurisdiction of SLAPP legislation.